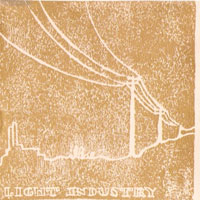 This time, 'Lighter Industry' is a companion piece to the new, limited-edition Ilkae album 'Light Industry', which those interested in the beautifully scattershot, chiptune-ish idm that the veteran artist deals in can check out at - http://www.inpuj.net/ilkae/ to buy the full-length.

As for this EP, it starts out with the deliciously semi-random 'LSK', before lapsing into the more relaxed with the fizzy 'Magnesium'. Other highlights include 'Espirit De Corps', which is almost Aleksi Eeben-esque in its pure indirectness, and the grin-inducingly named 'Endless Bark', all phasing ambient yum. Fanks, Ilkae!

Reviewer: mnsn - - October 2, 2008
Subject: Info
This EP is a companion piece to the new ilkae full-length "Light Industry". It contains three tracks excerpted from the album, as well as two unreleased bonus tracks. To check out the album proper, visit http://www.inpuj.net/ilkae/